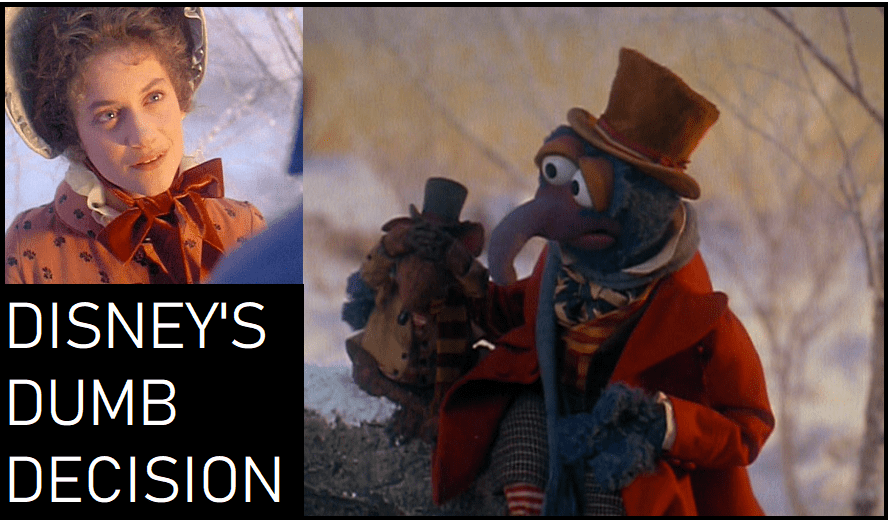 The movie was perfect, to begin with.

I’m serious. There’s something special about The Muppet’s Christmas Carol. This 1992 family film is directed by Brian Henson and is the first Muppet film produced by Walt Disney Studios.

Even people who aren’t fans of the Muppets like it. It’s full of heart, wit, and great songs, including one that’s gained some infamy.

Just last week, news dropped that ‘Love Is Gone’, the film’s lost ballad, has been found.

The song was lost to the vast Disney archives after being cut from the theatrical version, and has been missing for over twenty years. Those of us who were lucky enough to see the film on VHS got the experience of watching the film in it’s entirety, but the song is missing from later DVD, Blu-Ray, and even Netflix releases.

I was one of many fans who bought their replacement DVD after my VHS wore out, excited for a HD watch of my favourite Christmas movie, only to be confused by the lack of a pivotal scene.

So dust off your VHS tapes, big kids, and press fast forward to the 40 minute mark. It’s time to talk about an amazing scene that should never have been lost.

As the classic tale goes, Scrooge (Michael Caine) has been transported into the past to learn how not to be such a cold-hearted, well, scrooge. Up until this point, we as an audience have been feeling a little lukewarm towards him, as we should, but by seeing his past we’re slowly beginning to understand him and open up to him.

Scrooge opens up too, warmed by nostalgia at seeing his former headmaster and employer. All of this is building towards the moment when his fiancée, Belle, (Meredith Braun) leaves him. It’s in this emotional scene that Belle and Scrooge perform Love Is Gone.

Scrooge watches as Belle tells his younger self (Ray Coulthard) that she must leave him, because he doesn’t love her anymore.

When she sings, she’s expressing her regret but is resolute in her decision and as the song draws to a end, Scrooge stands by her side and sings with her – showing us that, years later, he still remembers her words.

Your break-up song is too ’emotionally sophisticated’ or something.

Rumour has it, the decision to cut the ballad belonged to Jeffery Katzenberg, chairman of Walt Disney Studios at the time, who thought the scene was too mature for children to enjoy.

If that’s true, that’s a pretentiously idiotic thing to say.

Also, what a way to miss the point. Yes, the song is emotional. Break-up songs are seldom anything else. Some may argue, as Katzenberg reportedly did himself, that it makes no difference to how the film plays. Not true. The song has a purpose and cutting it from the film fundamentally weakens it.

In the cut version, Belle walks away. She tells Scrooge he doesn’t love her, gets up, and leaves.

This makes Belle look cold. It makes us feel bad for Scrooge… for the wrong reason. It seems like Belle doesn’t understand that Scrooge is a motivated young man who uses money to express how he feels. If Belle had just loved Scrooge, he would have turned out alright. It takes the responsibility away from Scrooge, by blaming Belle.

This is not what happens in the version with the ballad, where Scrooge walks away.

The difference seems minor, but it isn’t. One version blames Belle, the other agrees with her. Belle sings Love Is Gone. She acknowledges that Scrooge does care for her, but he is growing more distant. Scrooge claims he loves her, but doesn’t protest. Because he can’t. He has no passion for their relationship. When he leaves, it’s the equivalent of him shrugging his shoulders. His actions are his alone.

This adds a brilliant contrast to Michael Caine’s Scrooge. This man, whose had years to reflect in isolation, watches Belle attentively. He could have thrown up his hands and said “Look at what this heartless woman did to me!” which is probably what his young self is thinking. Instead, he joins Belle and sings with her, and as he sings he grieves, the breakdown happening at such a pace that the audience feels every tragic second of it.

Spencer Braum, in a 2017 article on Medium, said it best:

We feel for Scrooge. We understand his regret and we understand that he can change. He didn’t walk away this time.

Which is the entire point.

This is what K.M Weiland calls the thematic Truth. A Christmas Carol asks us “Can Scrooge become a good person?” and this moment shows us he can. It’s brilliantly conceived, and one of the reasons that the Muppets is one of the best adaptations out there.

Your Plot Will Be As Solid As This Very Building

‘Love Is Gone’ occurs roughly at the 40 minute mark, at the Midpoint, and conveys Scrooge’s revelation and transformation. Now we understand Scrooge, and Scrooge gets a hint of understanding too, this raises the stakes.

But this glimpse of what his life could have been hurts.

He wants out and for what might be the first time in the story, we empathise with that. He demands the spirit leave him, seemingly rejecting the story’s thematic truth, and retreats to the comfort and safety of his bed chambers.

Deep down, he’s been humbled, making him open and ready for the lessons taught by the Ghost Of Christmas Present, who he quickly develops a bond with. But the rejection tells us that this is going to be difficult for him, and now we’re fighting in his corner.

Technically this moment still exists without the song, but it’s nowhere near as powerful.

Without the song, we simply cut to Scrooge (and Rizzo the Rat) in tears. Tears that aren’t earned. We don’t see him struggle with his emotions, we don’t see him stand beside Belle, looking at her, as he’s barely able to contain his regret. We don’t feel the moment with him. All of that is contained within the song and without it Scrooge’s arc is weakened.

Removing Love Is Gone has consequences all the way to the final minute.

A reprise is a repetition of musical material heard earlier in a composition, album, or live performance. Before the credits roll, Scrooge and a gathering of muppets sing ‘The Love We Found’ which serves as a counterpart to ‘Love is Gone.’

This closing song was purposely composed. A musical motif that follows a man’s transformation from a isolated, hateful man, to a open, compassionate one. It’s that satisfying kick every ending needs, a spotlight on his redemption, a wonderful, moving pay-off.

Which falls spectacularly flat when it’s musical thru-line has been cut.

How can love be found if it was never gone, Disney?

The pay-off remains without the set-up, the foundation that makes a pay-off satisfying, and without it the ending is weaker.

Read more about set-ups and pay-offs in my critique of Robot and Frank.

While I’ll never not be frustrated by this decision, I concede that the movie isn’t ruined by it. There’s too much fantastic, witty writing, quotable moments, and great songs for that.

Still, a little heart is lost and modern cinema seems to be going the same way. Disney, especially, don’t seem to understand what makes a story special, with their masses of live-action remakes on the way, all of which are dry, soulless imitations of their predecessors.

Now the song is back and the response has been positive, I hope the powers at Disney will notice the trend they’ve set and turn back. In the meantime, I’m satisfied that, finally, love is found.

What's this? An author's brand? You mean I have to boil down my complex human personality into something marketable? That's a lot of pressure. Where would I even begin? I have many facets. Many hats, if you will. One second I'm scribbling down heart-stopping thrillers, the next I'm writing a rhyming poem about a rabbit stealing eggs. What I'm writing could change any minute. No writer should have to stick to just one hat. View all posts by J.H. Dixon